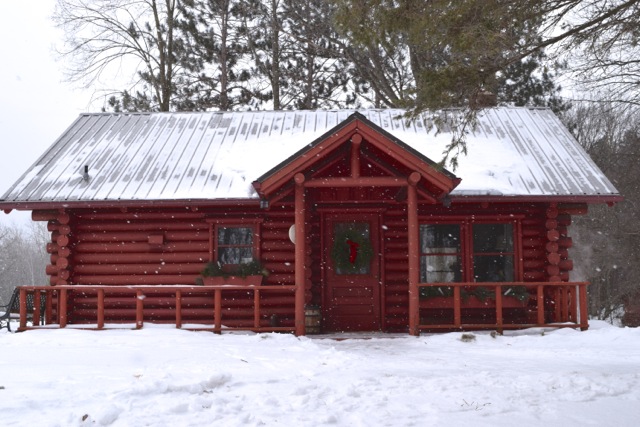 It has been one year since Grandpa and Grandma’s cabin and land became ours. The past year as been a whirlwind- and here we are to share with you all of the joyful moments, the work, the retreats- all the goodness that we’ve got goin’ on up at Crooked Creek Retreat. 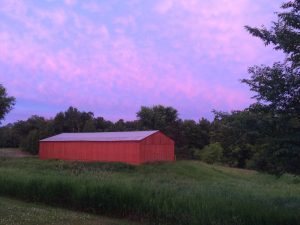 Last June we were joined by friends and family in support of our little dream. Dear friend Laura Johnson hosted, gave wings to the evening’s plans, where lovely flowers, pie and rose’ were supplied, and our hope was renewed.
In early July, we wrote a check to Howard and Marlene- seeing their shaky signatures on the purchase agreement made us so very grateful and their hearts were glad to see their sweet home remain in the family.
A generous gift from some soul friends provided a jump start to our renovations. We tore out the old basement bathroom and gave it a complete overhaul.

We hosted our first work (and play) weekend where we feasted on chili and roasted corn over the fire pit. Our worker-friends took down trees, barbed wire fences and revived an old outhouse. They weeded, sifted through rummage sale pots and pans, linens and stores and stores of sleeping bags! 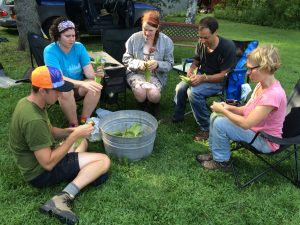 John Hermanson, a lifelong (feels like it) musician friend joined us in September for the grand opening of Crooked Creek Retreat. His music blessed our evening into the sunset. Ten families hoisted tents in the yard and camped overnight under the full moon. Magical. Birdsong and hot apple cider greeted everyone in the morning. 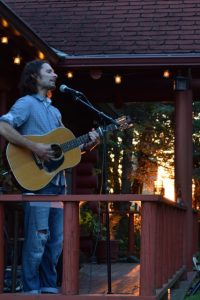 October was a mad scramble to complete house projects and prepare for our first Women’s Songwriting Retreat (second one to come this November!). Alison Rae and Jessa Roquet shared their perspectives on writing and we delved into songs of our own. 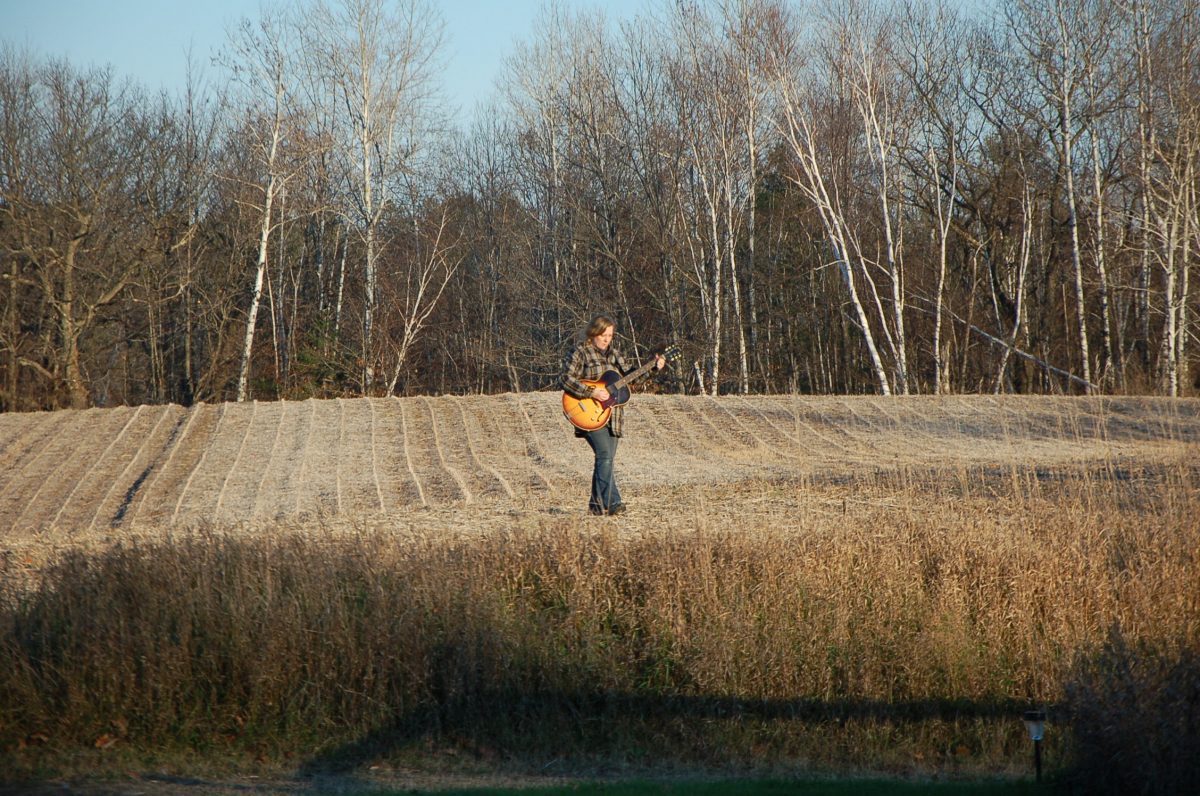 A highlight of the weekend was listening to the coyotes off in the distance as we sang together around the campfire into the wee hours of the night. A few of the women who attended were also featured at the Front Porch concert with Eliza Blue on August 6th. 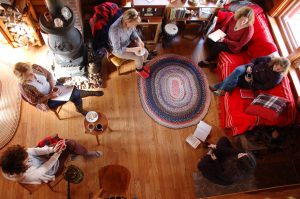 A herd of youngsters from the House of Mercy came up to go camping- well, really, go “glamping.” They ran around in the dark and played games, held a Bible study and of course, hung out by the fire together.
The very next day our septic system was replaced, a gift from the beautiful state of Minnesota, but by the hand of a hard-worker named Scott Jensen and his trusty backhoe. The first snowfall brought us a new steel roof. Families came to enjoy the cabin over Christmastime and New Years’, enjoying the snow, the epic sledding hills, snowshoeing, and Elijah’s cross country ski trails. They fired up the potbelly at the end of each day, basking in its warmth. 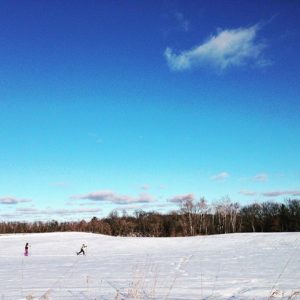 Solitude retreats took place- one person and a pencil and paper, a book, and a long winter’s prayer. Coffee. Maybe some knitting. Being. And again, fire.
The effervescent Paige DeWees hosted a Mindfulness in Photography retreat at the beginning of March, where we indulged in stillness and digging deep, hikes in the still-deep snow, exquisite cuisine (surreal vats of tortellini) and making pictures. The women captured beautiful angles of the Retreat and I hope to share them here and there with you in blogs to come.
A few families stole away during our mild month of March to nestle into the cabin, play board games, bake treats, all the while watching the birds return from winter travels.
In early April, Nora Alice graced us with a painting day retreat where we worked on creating family trees and connecting with one another in creative pursuit.
A great herd of family efforts came into the woods to help us with some major barn clean up. We tore down the old goat barn (ah, how I’d love to have goats!) to open up the pole barn for future events. My brother smashed apart a perfectly wretched old biff (with a little help from his friends). Good times and pungent memories that won’t leave anyone anytime soon! 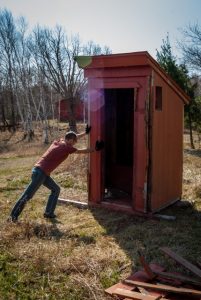 A sweet family from Ohio found us via the website and made the retreat a home for 24 days during the month of June! They escaped the motel they were residing in and had some space to breathe! Their boys were able to play in the woods and enjoy the fort our boys have built over the course of the past few years. The fort is epic: magical and remarkably large.
It was a blessing and a joy to share this space with the Warren Family!
A couple celebrating their 50th anniversary came at the end of June with their whole family- using both the Cedar and Maple cabins for the festivities. Momma Wetzig said she had always wanted to live in a log cabin and was thrilled to have this experience for three days.
Now launched on Airbnb, Crooked Creek Retreat has received a good amount of requests and we had our first booking in July! Take a peek yourselves!
https://www.airbnb.com/rooms/11159845?preview
We plan to host more music into the future; The Roe Family Singers joined us in an adventure of old time music on the front porch, Appalachian clogging in 90% humidity on a 90 degree day before the downpour came in, sending us into the Maple group cabin for an intimate house concert. The air conditioner did its best to keep the musicians cool and Fiddles on Fire sounded like a full Appalachian orchestra, backing up the Family with their energy and fiddle skills. 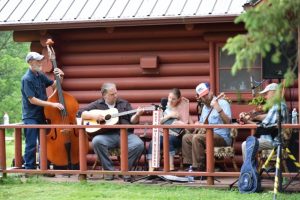 After the rains, fiddlers were showering under downspouts and musicians were mud-slinging minivans out of the cornfield…

It would only have been better had you been there. And that’s what we would like to do: invite you all to come and partake of this goodness, this little slice of the country that God (and so many others) have richly blessed us with. Crooked Creek Retreat. It’s for you. 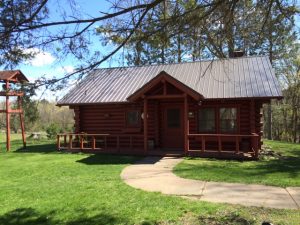